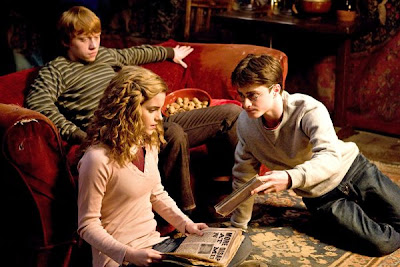 I wouldn't call myself a die-hard Harry Potter fan. I read the books. I watched the movies. I grew up with Harry Potter, so there's no point avoiding a phenomenon.

J.K. Rowling's Harry Potter and the Half-Blood Prince has always been my least favorite out of the seven-book series. The novel dragged on with boring details of ridiculous teenage relationship drama, lightly sprinkled with more engaging darker moments. Reading the book was a frustrating experience for me because I kept wanting to know more about Tom Riddle's (who later became the powerful, yet villainous wizard, Voldemort) past and the mysterious Half-Blood Prince, whose old Potions textbook shows his brilliance.

But the tender romantic moments translated well on-screen. The director, David Yates, and the screenwriter, Steve Kloves, clearly knows how to make me care about the raging hormones of these teenage characters more than Rowling does. Sometimes less is more.

Let me just say it: The movie is better than the book. I think I just flipped off a bunch of Harry Potter purists by saying that, but this is my opinion and I'm going to stand by it. I realize that this movie can be confusing without reading the book (according to my mom), but it does stand very well on its own. It shaves off the more uninteresting parts of the book and even if it did shave off some integral parts, I don't remember. It surely didn't affect the movie. I haven't read this book in at least three years. Too bad I don't have photographic memory.

The first part of the film can be best described as a charming and funny romantic-comedy, with signs of impending doom. The second part is darker and full of suspense. The change in tone is gradual, and because of what the earlier scenes masterfully hinted, the change is well, inevitable. Dark times have always been a norm in poor (and extremely lucky) Harry Potter's life. Being the chosen one isn't easy sometimes.

Adventures undoubtedly lie ahead for Harry in his sixth year at Hogwarts. Harry (Daniel Radcliffe) wants to know what his nemesis, Draco Malfoy (Tom Felton), is up to. Dumbledore (Michael Gambon) wants Harry to get close to the new Potions professor, Horace Slughorn (Jim Broadbent), who once taught Tom Riddle (Hero Fiennes-Tiffin) and may have slipped some information of dark magic that Tom, now Voldemort, found useful; Dumbledore wants Harry to find out what that piece of information is. Harry also finds a Potions book that makes him seem like the Potions Master he never was, but the book's mysterious origins, being the property of the "Half-Blood Prince," triggers some curiosity.

But Harry still wants to be a regular teenager and hang out with his friends--an internal battle that seems to be continuously fought and continuously lost. No matter how disturbing this may seem to Harry's best friend, Ron (Rupert Grint), Harry is infatuated with Ron's little sister, Ginny (Bonnie Wright), who has suddenly gotten more attractive (in context). Ron is facing his own battles with the flirtacious Lavender Brown (Jessie Cave) but ignorant of Heremione's (Emma Watson) love for him.

Of course, it wouldn't be a Harry Potter movie without the incredible cast of British actors. Over the years, a Harry Potter movie has become a sort of showcase of Britain's finest actors. Broadbent joins the cast as Slughorn, a suck-up to pure brilliance and greatness, but fearful to evil and menace. Broadbent is hilarious, especially in a scene where he holds a small party with his favorite students in his office and questions Hermione about her muggle (mortal) parents' occupation as dentists, but the performance never fails to show the human qualities in Slughorn.

Helena Bonham Carter returns as Bellatrix Lestrange, one of Voldemort's most trusted minions, in a truly terrifying, insane, and devilish performance, with her wild hair and full witch attire. Alan Rickman is again, a scene-stealer, as a the morally ambiguous and fascinating Professor Severus Snape, who seems more like an enemy than a friend at times--or somewhere in-between. Gambon reprises his role as Dumbledore and continues to mentor young Harry, as the boy wizard tries to understand the often dangerous, yet magical world around him.

The young actors are decent in their roles. I've gotten so used to Radcliffe, Watson, and Grint as their characters that there is no use for me to complain. Although Radcliffe can be as bland as a piece of paper as Harry, there are scenes when he brings a genuine sense of warmth and humor to his performance--and I can only wish that happens all the time. As supporting players, Grint delivers dependable comedic relief when he comes under the spell of a love potion and Watson injects her usual girlish charm in her performance. (And I'm still kind of wishin' Harry and Hermione would have ended up together! The chemistry between Radcliffe and Watson is still terrific.) Wright, as the love interest, is wooden, missing the small spark of spunk she seemed to have in the previous installment. There is also Evanna Lynch, who plays a Luna Lovegood so dreamily in-the-clouds that it is impossible to fall in love with the character all over again.

But out of all the younger actors, it is Tom Felton who delivers the most outstanding performance. I've never really gotten the appeal of Malfoy, or Felton's Malfoy, for that matter. Malfoy is simply a pathetic boy who acts tough. But in this film, Felton makes Malfoy more human and vulnerable than ever. Felton's Malfoy wants to show that he has what it takes to impress Voldemort, but he doesn't realize the price he has to pay. At heart, he's innocent, spoiled, and amazingly pathetic--and I don't know whether to laugh or sympathize with the poor kid. As Felton's Malfoy stood there, with a wand in his hand--shaking, crying, threatening--I finally cared about him. In short, Felton manages to bring more complexity and internal conflicts to Malfoy than I could have ever imagined.

Cinematographer Bruno Delbonnel magnificently mixes lush tones to the film--shades of grey, blue, green adds a certain beauty to Rowling's universe. I didn't expect anything less from someone who has also photographed Amelie, one of the most gorgeous-looking films I've ever seen. The special/visual effects are, like many of the predecessors (perhaps with the exception of Harry Potter and the Order of the Phoenix), fantastically breathtaking.

The Half-Blood Prince is an immensely entertaining film. Clocking at about 2hrs and a half, it managed to keep the kids tight in their theater seats and relatively silent. It may not be the best film in the series (that award goes to the action/adventure-high Harry Potter and the Goblet of Fire), but it's dark, sinister, funny, tender, heartbreaking, and emotionally compelling. Being second best is not that bad, right?
Posted by Marcy at 6:02 PM

Earn travel rewards from ShopAndEarn when you buy movies.